Ceding the spotlight is never easy — especially when the scene-stealer in question is the cool new kid at school that everyone wants to talk to and learn more about.

Madison cradling Jesus, who's said to be a stage 5 clinger
credit: @thatdamnvegann / Twitter

Nevertheless, that was the situation Jesus the cat found himself in when his human mom, Madison Ellis, came home earlier this month with a new kitten, Cinderella, that she rescued from the side of the street.

A junior studying veterinary science at the University of Florida, Ellis is something of an animal freak with a soft spot for strays — and the 2-month-old 'Ella was just the latest addition to her ever-expanding flock, which currently includes eight cats, five dogs, and a lone pig (A PIG!).

Not everyone can have such a perfect summer body 🤗 pic.twitter.com/0TjvkwS7Cm

Because Cinderella is so young, the Florida woman feeds her special kitten chow, while the rest of the adult cats, including Jesus, who she describes as extremely "clingy", take their meals in a bathtub (the better to keep the dogs from dipping into their stash, LOL).

But it wasn't long before Cinderella found her way to this bathroom banquet hall — and when she did, Ellis reached for her camera to take a snap because, as she told BuzzFeed News, "if you're a pet owner you know there's no wrong time to take a picture of your pets." ("AGREED!" — everyone here at Cuteness [dot] com.)

The resultant image, above, was indeed pretty freaking cute.

But Jesus wasn't going to take Ella's entitled interloping lying down. So he crashed the scene with an epic photobomb that's since gone viral, accompanied by breathless proclamations of "SAME," "is me," and "relatable AF."

When she realized what she had on her hands (i.e. internet gold), Ellis bundled the pics into a photoset and shared them on Twitter where it didn't take long for the annoyed and envious kitteh to find a (much) wider audience.

I was trying to take pictures of my new kitten eating and....my other cat wasn't having it pic.twitter.com/SBttOBn8KA

Naturally, the thread attracted a flurry of retweets — nearly 75,000+ plus as of time of publication — but it also prompted folks to share photobombs of their jealous animals.

That reminded me of this pic.twitter.com/AKnHwT2smx

"This cat is literally me," joked a second.

This cat is literally me pic.twitter.com/WNfkEox6QU

"I'm the boss around here."

In the aftermath of the post's surging popularity, which Ellis totally didn't expect, she jumped back on Twitter to clarify that no, Jesus, wasn't in fact an edgelord monster consumed by pettiness and jealousy.

In fact, if this tweet is to be believed, he actually loves his new "sister".

Do you like what you're reading? Awesome! Like us on Facebook for more laughs, join our newsletter for maximum cuteness, and then scroll through these photos of 26 chubby kitties who prove big is beautiful. Your life is about to get 2,000 percent more adorable! Congratulations!

Science Is Answering A Burning Question About Which Animals Pass Gas

28 of the Best Cat Lock Screens Ever

Woman Mistakes Adorable Koala Brawl For Something Else Entirely 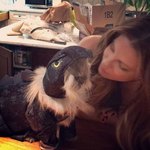 Kate Beckinsale's Cat Is The Cutest, Most Ferocious Dinosaur