Look, we get it, 2017 has been a strange and polarizing year for a whole mess of reasons, but if there's any one thing that can bring the internet together, it's a funny dog video.

And this year definitely gave us — and future meme historians — a bumper crop of hilarious clips that will reverberate long into the viral future.

From corgis stumped by fallen logs and dogs stealing empanadas on live TV to dogs stealing hula hoops and crashing live TV newscasts, these are the 25 funniest dog videos that everyone — and I mean EVERYONE — was buzzing about in 2017.

1. This pup on his way to steal yo girl.

when she says she only dates good boys pic.twitter.com/c0dR0VqHic

2. This corgi that got separated from his squad.

3. These doggos that couldn't even deal when they realized they were going for a walk at their favorite dog park.

Full Story: Dogs Lose Their Gosh Dang Mind When Their Human Says This One Thing

4. And this one that threw a tantrum when his human decided it was time to leave.

The dog who REALLY wasn't ready to leave just yet . . . . . . Jukin Media Certified Find this video and others like it by visiting https://www.jukinmedia.com/licensing/view/966134 For licensing / permission to use, please email licensing@jukinmedia.com

Full Story: You Won't Believe What This Dog Did To Avoid Leaving The Park

5. This opportunistic dog that wasn't afraid to shoot his shot on live TV.

Full Story: Hero Dog Stealing An Empanada On Live TV Is All Of Us

6. This St. Bernard that wanted absolutely nothing to do with his family's new pet hamster (hover over to play).

7. This big bro dog teaching his smaller baby bro to sit for treats.

8. All of these perplexed pups learning to walk in snow booties.

9. This dog that just discovered what he wants to do with the rest of his life.

I took my son to the fair and he had fun pic.twitter.com/Kk3mGjL1Qq

Full Story: 15 Animals Who Are Making A Run For It

Full Story: French President's Pup, Nemo, Just Peed In A Fireplace During A Meeting Because Dogs

12. This pure AF corgi trying to share a bone with his own stubby-legged, loaf-like reflection.

Full Story: Innocent Corgi Trying To Share A Bone With His Reflection Is Giving Us Emotions

13. This dog doing the doggie pedal.

Full Story: Dog Who Thinks She's Pedaling A Bike Will Make You Awww So Hard

14. This strong, independent doggo that doesn't need a human to play fetch, thank you very much.

Full Story: 15 Dogs Playing Fetch By Themselves Because Being Introverted Is Awesome

15. This dog, Dodger, who broke the internet when he was reunited with Chris Evans (of Captain America fame) after the actor returned home from a 10-week film shoot.

16. These dogs who gathered around their regular UPS driver for a summer selfie.

When you have the best UPS man on the planet... To use this video in a commercial player or in broadcasts, please email licensing@storyful.com

Full Story: These Rowdy Dogs Bark At Most Drivers, But Then They Met This Guy

17. This dog — a/k/a the coolest dog in the history of cool dogs — rocking some sweet shades and kicks on the train in NYC.

18. This dog that shops for himself like a boss.

Did he pay for that? If so, where does he keep his wallet?

19. This Russian dog that crashed a live newscast at just the right moment.

20. This pup locked in battle with an evil doorstop (hover over to play).

Full Story: This Puppy Defending His Family From An Evil Door Stop Will Brighten Your Day

22. This dog that returned for his favorite chew toy after he got spooked by a frog.

Full Story: Dog Returns For His Favorite Toy After He Gets Scared

23. This impatient pup that thinks it is time for you to return to the car already.

ICYMI: Video of a dog honking for its owner in Osage Beach. (Courtesy: Tarah Kenney) http://bit.ly/2o6T48o

Full Story: This Boxer Leaning On The Car Horn Is The Funniest Thing You'll See Today

24. This German Shepherd coming to the rescue of his pit bull buddy.

25. This dog that left the peloton in his dust (for about 30 seconds).

Did we miss your favorite funny dog video of 2017? Share it with us in the comments below!

18 Pups Riding Shotgun On Your Next Motorcycle Ride

16 Dogs Who Farted & Ruined Everything 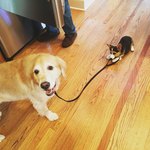 16 Reasons Why We’re Pretty Sure That Driving Dogs, Not Driverless Cars, Are The Future 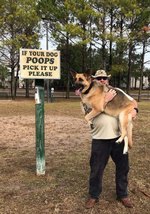 21 Dogs Who Aren't Here To Meet Your Expectations